We exist to build and invest in the health and wellness of the Brandon Community. 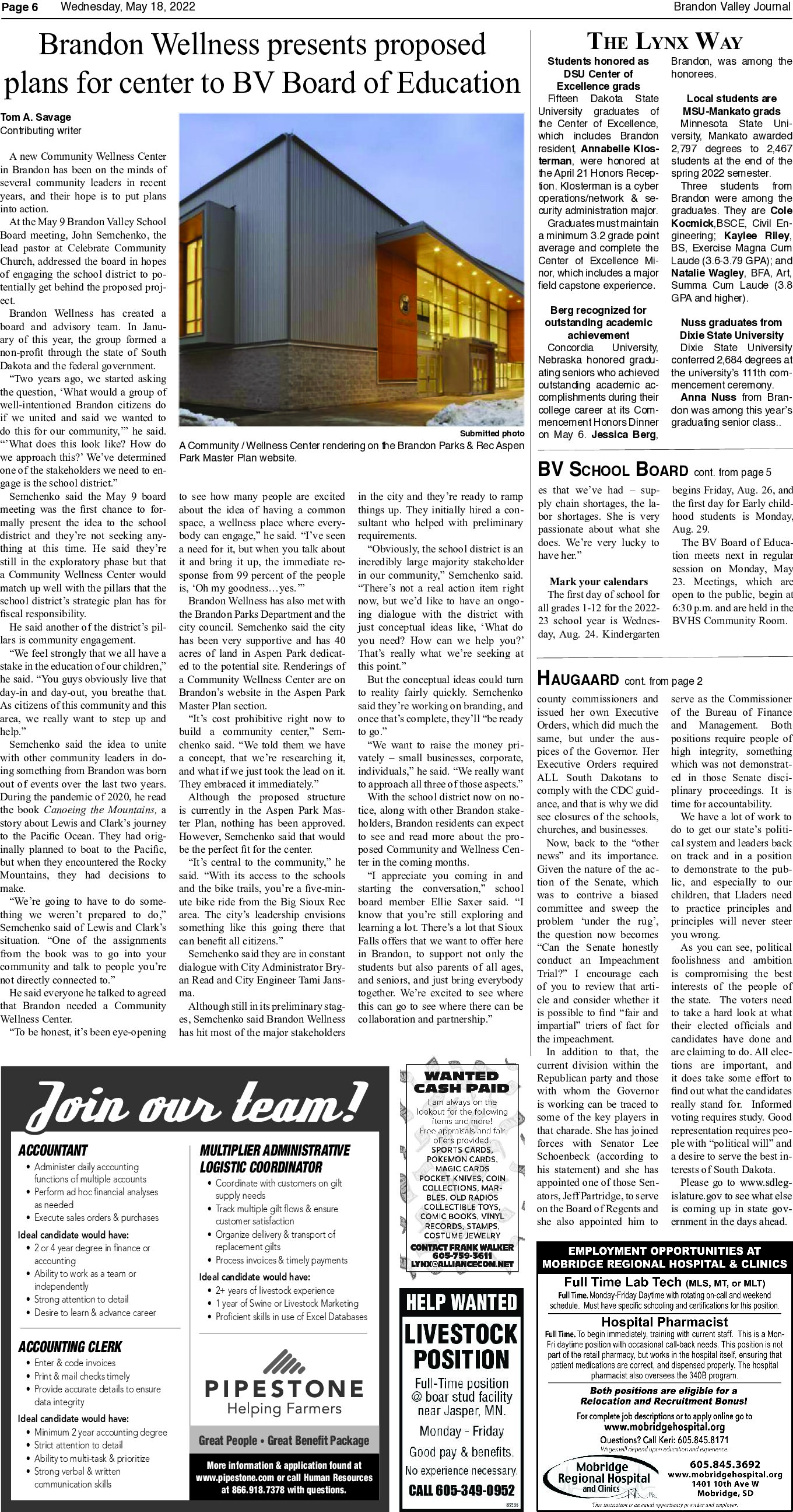 A new Community Wellness Center in Brandon has been on the minds of several community leaders in recent years, and their hope is to put plans into action.

At the May 9 Brandon Valley School Board meeting, John Semchenko, the lead pastor at Celebrate Community Church, addressed the board in hopes of engaging the school district to potentially get behind the proposed project.

Brandon Wellness has created a board and advisory team. In January of this year, the group formed a non-profit through the state of South Dakota and the federal government.

“Two years ago, we started asking the question, ‘What would a group of well-intentioned Brandon citizens do if we united and said we wanted to do this for our community,’” he said. “’What does this look like? How do we approach this?’ We’ve determined one of the stakeholders we need to engage is the school district.”

Semchenko said the May 9 board meeting was the first chance to formally present the idea to the school district and they’re not seeking anything at this time. He said they’re still in the exploratory phase but that a Community Wellness Center would match up well with the pillars that the school district’s strategic plan has for fiscal responsibility.

He said another of the district’s pillars is community engagement.

“We feel strongly that we all have a stake in the education of our children,” he said. “You guys obviously live that day-in and day-out, you breathe that. As citizens of this community and this area, we really want to step up and help.”

Semchenko said the idea to unite with other community leaders in doing something from Brandon was born out of events over the last two years. During the pandemic of 2020, he read the book Canoeing the Mountains, a story about Lewis and Clark’s journey to the Pacific Ocean. They had originally planned to boat to the Pacific, but when they encountered the Rocky Mountains, they had decisions to make.

“We’re going to have to do something we weren’t prepared to do,” Semchenko said of Lewis and Clark’s situation. “One of the assignments from the book was to go into your community and talk to people you’re not directly connected to.”

He said everyone he talked to agreed that Brandon needed a Community Wellness Center.

“To be honest, it’s been eye-opening to see how many people are excited about the idea of having a common space, a wellness place where everybody can engage,” he said. “I’ve seen a need for it, but when you talk about it and bring it up, the immediate response from 99 percent of the people is, ‘Oh my goodness…yes.’”

Brandon Wellness has also met with the Brandon Parks Department and the city council. Semchenko said the city has been very supportive and has 40 acres of land in Aspen Park dedicated to the potential site. Renderings of a Community Wellness Center are on Brandon’s website in the Aspen Park Master Plan section.

“It’s cost prohibitive right now to build a community center,” Semchenko said. “We told them we have a concept, that we’re researching it, and what if we just took the lead on it. They embraced it immediately.”

Although the proposed structure is currently in the Aspen Park Master Plan, nothing has been approved. However, Semchenko said that would be the perfect fit for the center.

“It’s central to the community,” he said. “With its access to the schools and the bike trails, you’re a five-minute bike ride from the Big Sioux Rec area. The city’s leadership envisions something like this going there that can benefit all citizens.”

Although still in its preliminary stages, Semchenko said Brandon Wellness has hit most of the major stakeholders in the city and they’re ready to ramp things up. They initially hired a consultant who helped with preliminary requirements.

“Obviously, the school district is an incredibly large majority stakeholder in our community,” Semchenko said. “There’s not a real action item right now, but we’d like to have an ongoing dialogue with the district with just conceptual ideas like, ‘What do you need? How can we help you?’ That’s really what we’re seeking at this point.”

But the conceptual ideas could turn to reality fairly quickly. Semchenko said they’re working on branding, and once that’s complete, they’ll “be ready to go.”

“We want to raise the money privately – small businesses, corporate, individuals,” he said. “We really want to approach all three of those aspects.”

With the school district now on notice, along with other Brandon stakeholders, Brandon residents can expect to see and read more about the proposed Community and Wellness Center in the coming months.

“I appreciate you coming in and starting the conversation,” school board member Ellie Saxer said. “I know that you’re still exploring and learning a lot. There’s a lot that Sioux Falls offers that we want to offer here in Brandon, to support not only the students but also parents of all ages, and seniors, and just bring everybody together. We’re excited to see where this can go to see where there can be collaboration and partnership.”